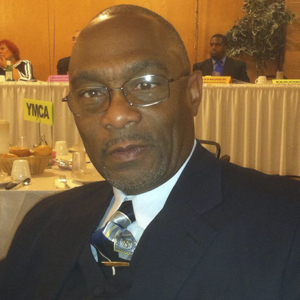 Bishop Andre W. Jackson is a native of Richmond, California where he still resides and for over 21 years has owned Jackson Medical Supplies and Equipment. He owns a record label, Ground Up Record & Production Co., and is the Vice-President of BASA Publishing and The American Clergy Leadership Conference of Northern California and National Co-Chair. Bishop graduated from Sacramento Theological Seminary with a master’s degree in Christian Counseling and Theology and a doctorate degree in Christian Education and Theology.

A family man with many talents and experiences, Bishop Jackson has been in the music field for over 35 years. He managed a group called the Variations and traveled the world. He produced songs for the king of funk, George Clinton; traveled with James Brown and the late Johnnie Taylor as a road manager. He has written over 150 songs which are registered with the U.S. Copyrights Office. He was in professional boxing and traveled with Muhammad Ali and mentored and; managed a four-time World Champion, Michael McCullam from Jamaica.

Jackson is a founding board member for Healthy Communities based in Oakland, California. This faith-based nonprofit grew from a vision to a multi-million-dollar organization within 10 years. It was the first African American, state-licensed community free clinic with wrap-around services in California.

Bishop Jackson traveled the world in 2007 being chosen out of 120 religious’ leaders in America to complete the journey. He was the first Christian leader to speak in the greatest Buddhists Temple in Cigar, Japan. As part of his world ministry, he started a movement with over 1,000 youth in Cameroon Africa.

His current business expansion is with Fisher Realtor in Richmond as a Real Estate Agent. He was a key person in creating the African American Garden at Rolling Hills Memorial Park in Richmond, California called Grace and Freedom. Jackson is a visionary … if you want to get something done give him a call.

He is a serious and dedicated local community advocate and activist who is very active within his community bringing churches, businesses, local officials and property owners together to create a better community. Bishop Jackson also partnered with Citi Bank to help bring local jobs, information and knowledge to the inner-city community where they talk, inform and teach about the banking system and financial freedom.

The goal for this Appreciation is when someone says they love you; you can give a response back with a hug, smile or just a I love you also.

Bishop Jackson started the Healthy Communities and Carriage Hills Community Church Prayer Line because there was a great need for prayer in our homes, communities, nation and the world. Their motto is simple; “Be Honest with Yourself and God”. Since 2012, they have been on the Prayer Line 7 days a week starting at 6:30 every morning. Between that time and now there have been many life changing events, tragedies and loss of lives but nothing has stopped them yet.  To speak with Bishop Jackson directly, please call (510) 734-6291.