On June 9th, 2015, Riverside Public Utilities issued a press release regarding the City of Riverside’s Writ of Mandate and Complaint, which was filed against the California State Water Resources Control Board. The complaint includes a verified petition which demands relief regarding the State of California’s recent decision to implement emergency drought regulations throughout the state. Riverside Public Utilities is being fined $10,000 a day for noncompliance to the state’s regulations, but the company states that they have worked overtime for their city to become water independent, and have reduced the amount of water usage per capita in the city by 23 percent since 2004.

California is currently facing one of the most severe droughts in its history. Governor Edmund G. Brown, Jr. declared a drought State of Emergency in January and instructed state officials to take any actions necessary in order to prepare for impending water shortages. In April, the State Water Resources Control Board announced that Californians increased their water conservation to 13.5 percent. In May, the Governor applied a mandatory average conservation rate of 25 percent for all state residents, effective beginning the month of June.

According to the State of California’s website, the regulation that the Water Board adopted on May 5th employs a sliding scale so that the communities that were conserving water prior to the Executive Order will have lower mandates than those that have not conserved in the past year and/or decades since the state’s last major drought. The regulation categorizes each urban water supplier into one of eight tiers which are assigned a conservation standard, between 8 percent and 36 percent.

For over two years, California has been dealing with the harrowing effects of the drought. During 2014, the State Water Board implemented plans to increase access to recycled water in an effort to supplement scarce water supplies. This has resulted in an approval of low interest loans for a number of water recycling projects as well as making $800 million dollars in loans available for the creation of recycled water treatment, and distribution and storage facilities which should be completed by 2017.

The City of Riverside holds that the Governor’s mandate does not take into account the fact that the city has an adequate amount of water. Riverside Public Utilities was established in 1895 and is a consumer-owned water and electric utility led by a board of community volunteers. The nine volunteers ensure that the utility company gives high quality and reliable service to more than 107,000 metered electric customers and more than 65,000 metered water customers throughout the city of Riverside. The company describes itself as committed to the increased use of renewable energy resources and sustainable living practices with the aim of limiting environmental impacts in the City of Riverside and, ultimately the state of California.

The company issued a statement saying that their actions do not go against the plans of the Governor for emergency water conservation, nor does it conflict with the Water Board’s emergency drought guidelines. The General Manager of Riverside Public Utilities, Girish Balachandran, states that the company is committed to water conservation. In fact, according to reports made by the State Water Board, the amount of water used in the City of Riverside in April 2015 was equal to the statewide average of 14 percent, and was below the average for other cities within the same region.

“As an independent Public Utility, we strongly and urgently believe in water conservation and we have worked since 2004 to establish enough reserves to be water independent and not rely on state water resources,” stated Balachandran. “Our conservation efforts have resulted in a 23 percent decline in per capita water use over the last six years.”

Riverside maintains that it is a model city for the conservation of water, and that they easily meet the State’s guidelines of water independence, in line with the Writ of Mandate. The city has enough water to serve its customers, with a four year supply of water in an underground water basin that is regularly replenished. Earlier this year, Riverside Public Utilities even wrote a petition the Water Board, requesting to be included in the 4 percent conservation tier set up for water suppliers who can meet the definition of water independence.

According to Balachandran, “[Their] request was ignored and no evidence was given as to why including groundwater suppliers would be any more difficult than including surface water suppliers.” Balachandran goes on to say that the state of California’s Water Board is discriminating against the city because it has an underground reservoir, rather than an above ground one. “Simply put,” says Balachandran, “our groundwater basin with its ample reserves that regularly recharge is the same as if we owned an above ground water reservoir that met the state’s requirement for water independence.”

Currently, unless there is a temporary restraining order and injunction issued, the City of Riverside will be forced to pay a daily $10,000 fee. “If the Water Board does not reconsider its position toward Riverside Public Utilities, it sends a message that our efforts since 1913 to be water independent have been in vain,” states Balachandran. “It means our prior capital expenses and ongoing investments in groundwater management would become significantly stranded investments that are not serving our residents and rate payers.”

The press release was concluded with Balachandran stating that he seeks to work together with the Water Board in order to resolve this situation, while recognizing the dire situation of the drought and Governor Brown’s timely mandate. 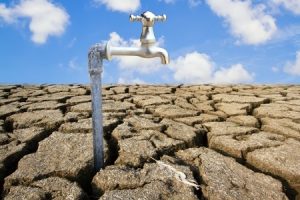