Corona Virus: Everything you need to know and more

The World Health Organization (WHO) has declared a global emergency over the new coronavirus following an outbreak in the central Chinese city of Wuhan. The news of the virus began spreading and making headline in December 2019 and from Wuhan to as far-flung as the United States and Philipines, the virus has infected tens of thousands and the death toll keep rising, now with over 2000 deaths. In spite of the global panic, health experts say that it is hard getting the virus unless you are in direct contact with someone who has recently traveled to certain parts of China. The world health organization named the disease caused by this virus COVID-19 (Co- corona, Vi-virus, D- disease, 19-the year it emerged). While the number of people infected keeps growing, there has been quite a remarkable recovery, over 21,000 people have recovered from this illness, but cases have been reported in 31 other countries.

The Origins of Coronavirus

The public health officials from China informed the WHO that they had a problem; an unknown, new virus causing flu-like and pneumonia-like illness in the city of Wuhan. This was in December 2019. After reporting the incident, it was quickly discovered that it was a coronavirus, and it was rapidly spreading through and outside of Wuhan. Coronaviruses are common, especially in animals of all kinds. Sometimes, they evolve into other forms that can be passed on to humans. So far, we only know two other coronaviruses which have affected the humans; Severe Acute Respiratory Syndrome (SARS) outbreak in 2002-03 and the Middle-East Respiratory Syndrome (MERS) outbreak in 2012. Originally, the theory was that the virus first infected people at the seafood market of Wuhan and spread from there. One analysis differs claiming that the first patient to get sick did not have any contact with the seafood market.  The scientist is still trying to trace the origins of the virus.

One might brush off the symptoms of the disease as they range from mild to moderate upper respiratory tract illness, very similar to a common cold. Coronavirus symptoms include a runny nose, cough, sore throat, fever, and possibly a headache all of which can last for a few days. Children and the elderly are particularly vulnerable, there is a high chance that this virus could cause a lower, and a much more serious respiratory tract illness like pneumonia or bronchitis. So far, WHO has been able to identify a handful of human coronaviruses that have been so lethal.

First identified in the Guangdong Province in Southern China, SARS is one of the coronaviruses that has been known to be lethal to humans. According to WHO it causes respiratory problems, but it can also cause diarrhea, fatigue, shortness of breath, respiratory distress and kidney failure. The death rate with SARS ranged from 0-50% of the cases, with older people being the most vulnerable.

MERS is the other identified disease known to be deadly. It was first identified and reported in the Middle East in 2012 and much like the SARS, it causes respiratory problems, however, the symptoms are much more severe. CDC reported that 3-4 people out of 10 infected with the disease died.

The COVID-19 is thought to be much milder than the SARS and the MERS and has a longer incubation period. To date, most cases are reported to be associated with mild coughs for a week, followed by a shortness of breath which leads them to the hospitals. So far, about 15% to 20% of the cases have become severe requiring drastic measures such as ventilation in the hospitals.

China Is Know to Lie About Facts, Are They Doing It With COVID-19

In 2002 during the SARS outbreak, Chinese officials attempted to conceal the cases from WHO inspectors, limiting the information flow, both internally and externally. This time, it is different, officials quickly reported the outbreak of the new virus to the WHO. Chinese officials are also allowing a team of WHO experts to assist its public health team with ongoing work. The United States Department of Health and Human Services has praised the Chinese government for its transparency. “The Chinese government’s level of cooperation is completely different from what we experienced in 2003,” said department Secretary Alex Azar during a press conference.

Nonetheless, there are still a number of people who are skeptical and are raising concerns that the Chinese officials are undercounting the number of illnesses and are classifying deaths that might have been from the virus as being from pneumonia.

How Dangerous Is COVID-19

The severity of an illness is determined by both how easily it spreads and how lethal it is. To assess new flus, epistemologists often use this tool, for guided decision-making. 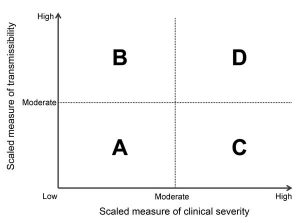 If a virus is not too dangerous, but it is highly communicable/transmissible, it can still cause some devastating effects, if it ends up affecting millions of people. Though it might kill just a small percentage of people, it will leave high number of fatalities. To this end, researchers are still trying to grasp the severity of the disease by analyzing its symptoms. Around 20 percent of the cases that have been identified have turned out severe. This is only what has been let out to the public, it is still possible that there are many more mild cases of the illness that we are yet to know about.

While it is too early to tell, the fatality rate of the new illness is around 1 or 2 percent, that could change as the outbreak progresses. Most of the reported deaths in this outbreak have been in older people who have underlying health issues like heart disease, hypertension, and diabetes.

How the Virus Spreads

Basically, viruses can spread from human to animal contact. Scientists think that MERS started in Camels. With SARS scientists suspected that the virus could have come from civet cats. With COVID-19, scientists do not know where the virus originated from. When it comes to transmission between humans, it often happens when a person comes into contact with an infected person’s secretions.

Depending on the virus’s virulent, a cough, a sneeze or a handshake could cause exposure. The virus could also be transmitted by touching something that an infected person has touched and then touching your mouth, nose or eyes.

Human-to-human transmission has been confirmed for the Wuhan coronavirus. Right now, what experts are trying to understand is who is transmitting it the most, who is at the most risk and whether the transmission is occurring mostly in hospitals or in the community. For the SARS and MERS, most transmissions happened in the hospitals.

From studies of the virus, the most vulnerable people are older people, but there is a cloud of uncertainty around this new illness. Of the cases reported in Wuhan, so far, there appears to be no children casualties. The average age is people over 40 years and over.

Is There Any Treatment?

So far, there is no standard treatment but more research is underway. In most cases, the symptoms die away on their own, but experts advise getting care early. If the symptoms feel worse than the standard cold, see your doctor. The doctors can relieve the symptoms by prescribing a pain or fever medication, CDC says that a home humidifier or a hot shower can relieve the sore throat or cough.

You Shouldn’t be Worried unless you have been to China!

Some people might be thinking, since I am having flu-like symptoms, this must be it. But if you haven’t been to China or in contact with a person from China it is unlikely you have this virus. The fatality rate of the Wuhan coronavirus is lower compared to SARS or the MERS but comparable to the 1918 Spanish flu pandemic.

Prevention is cure, and since there is no vaccine to protect against this family of viruses reducing the risk yourself is key. Avoid close contact with people who have been recently affected. Avoid touching your mouth, nose and eyes also, make sure you wash your hands often with soap and water for at least 20 seconds.