[vc_row][vc_column][vc_column_text]The history of homeownership by generation is particularly daunting. The period since the housing crisis began has been a tragic chapter in the history of the black community’s access to wealth building. Black history month celebrates the progress towards racial inequality and still reminds us of the work that needs to be done. Homeownership is known to increase a family’s financial security, but black people and other minorities lag behind the whites contributing to the racial wealth gap.[/vc_column_text][vc_column_text]JUST HOW BAD IS IT?

Homeownership rates in the United States for the last 20 years have hovered between 65 and 69 percent, with a rise then a dip before and after the 2008-09 housing crisis. In Q4 2019, the percentage of the households that owned a home had a slight recovery rebounding to 65.1 percent. However, the persistent gap continues to divide renters and homeowner households along deep racial lines.

Between the years 2016 and 2019, Data from NAR shows the percentage of Whites owning a home had been slightly above 71 percent. However, during the same period, the homeownership for the Black Americans had remained consistently at 41 percent.

Northwestern and Midwestern cities have the widest gap between black and white residents making the south and western part better. The metropolitan areas with the broadest number of black residents are Chicago, Atlanta, Washington DC, New York City, and Philadelphia. 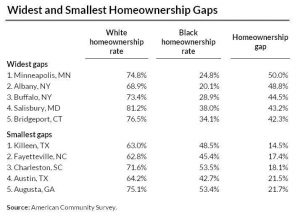 The wealth difference between blacks and whites is the ideal example of inequality in America. White American families, on average have $142,000 in their savings and assets, Black families meanwhile amounted to only$11,000. Urban centers have much more severe racial inequality because of the concentration of wealthy white people. Wealth inequality stems from several factors, and homeownership plays a significant role. In the present day, an influx of whiter, more affluent residents are pushing older black residents out.

THERE’S MUCH LEFT TO DO WITH HOME OWNERSHIP

While Hispanic and Asian-Americans experienced respective homeownership gains of 5.7% and 7.1%, according to the JSHS report, a 29% gap between whites and African Americans remains. This finding confirms that the 50 years of fair housing initiatives have yet to achieve their goals. Blacks are found to be more likely than whites to be denied a conventional mortgage loan.[/vc_column_text][vc_column_text title=”HOME OWNERSHIP GAP BETWEEN BLACKS AND NON-HISPANIC (WHITES)”]BEST WAYS TO BRIDGE THE GAPS

“Things like the mortgage interest tax deduction provide a high benefit to people who earn at the top of the income distribution, whereas those who earn at the bottom earn very little of that deduction, and that’s because it’s based on house values,” says Ruetschlin.

Because black homeowners are more likely than white homeowners to have been steered towards the mortgage and have their homes at risk of foreclosure. The authors proposed having these institutions to modify mortgage in ways that make them more sustainable.

Leaving the cap on the mortgage interest tax deduction

Because black homeowners have homes for a lesser value than typical white homeowners, they also benefit less from the tax deduction. Capping the deduction at 28% for households earning more than $250,000 could help decrease the racial wealth gap.

These might seem like significant policy proposition to bridge the gap between the Blacks and non-Hispanic whites, in essence, they are small when compared to all the policies the Government has enforced that have disproportionately helped the White Americans build wealth over the years; such as the G.I Bill, the mortgage interest deductions, the New Deal infrastructure projects all of which have left out the minorities.

It’s time that the Government stepped in to correct the inequity it has helped create and for Americans to embrace the spirit as well as the letter of these laws without regard to race, ethnicity, gender, or disability. Just as president Johnston stated 50 years ago,” we have come some of the ways not near all of it. There is much more to do, but to begin, there must be a political will to help the minority communities at a level that America has never had or done on the past.

The Power Is Now Media has been operational since 2009 and our mission has been very clear; to help you in the journey to become a homeowner.  Believe it or not, today it is possible to get your own home without investing anything in down payment or closing cost.  Speak to one of our VIP agent agents to help you start your homeownership journey, to check whether we have agents in your county click the following link https://thepowerisnow.com/vipagentsservices/.  You can also contact me directly for a referral if we do not have an agent in your area.  Stay up to date with current real estate news and housing developments, by visiting our blogs page at https://thepowerisnow.com/blog/ daily.   If you’d like to set an appointment and speak to me directly, use the following link, https://calendly.com/thepowerisnow/ericfrazier