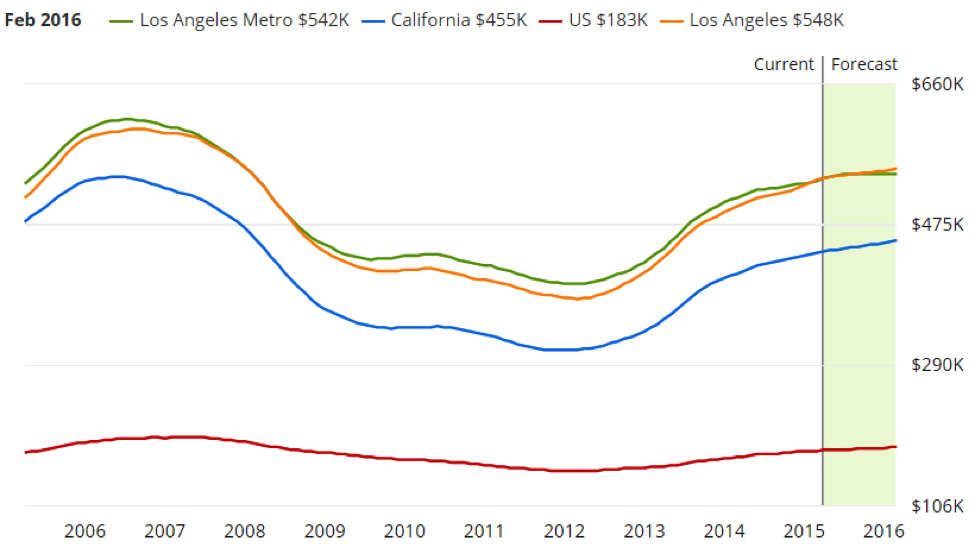 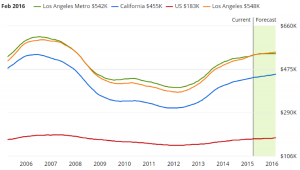 If you’re considering moving to Los Angeles, be prepared for steep prices. The Los Angeles metro is an extremely hot sellers’ market with little for-sale inventory and excessive buyer demand. The area is pricey with a median home value of $533,700, well above the national median of $178,700. Regardless, buyers are still competing for expensive properties in this bustling region. Besides the draw of the busy city, buying in the Los Angeles metro is a wise investment as home values continue appreciate. In the last year, home values rose 4.5 percent and are predicted to continue to rise through 2015.

In the narrowed parameters of the city of Los Angeles, the market is far less competitive with balanced supply and demand. Buyers find more inventory for sale, but prices are nearly equal to the greater metro area ($534,600). Remarkably though, annual growth in Los Angeles was 7.1 percent in the last year, a far greater appreciation rate than home values in the metro area. Although the market is anticipated to appreciate further within the next year, home values cannot maintain such dramatic growth, indicating future appreciation will be far less impressive.

Home values across the country fell more than 20 percent during the housing crash. Since the Great Recession, national home values have recovered by more than half their losses. Still, home values are 9.3 percent below their previous values recorded at the peak of the housing bubble in 2007. In Los Angeles, home values are 13.8 percent below their previous highs. Home values in both Los Angeles and across the country recovered tremendously in a short time span from the bottom of the market in 2012. While appreciation will continue, it’ll be at a healthier, slowed rate.

The accepted rate for sustainable home value appreciation is 3 to 5 percent. On a national level, annual growth finally slowed to 4.9 percent in February 2015 – a healthy level. In the city of Los Angeles, appreciation cannot continue at such rapid rates (7.1 percent year-over-year). Homeowners riding the recent boost out of negative equity should not expect the steep appreciation to continue.

All across the country, homeowners struggled throughout the Great Recession. Some lost their jobs and couldn’t afford their mortgages. In turn, these homeowners were forced into foreclosures or short sales. Others fell deeply underwater, owing more on their homes than their properties were worth, and were unable to sell unless they brought cash to the table.

The first sign of a foreclosure is mortgage delinquency, and the percentage of homeowners with a mortgage who are late on payments in both the Los Angeles metro (6.3 percent) and city (6.6 percent) are on par with the country as a whole (6.3 percent). Mortgage delinquency is a result of the Great Recession; many owners depleted their savings after losing their jobs, keeping them afloat for some time, but extended unemployment or emergent bills without the savings cushion led them to post-recession delinquency. Foreclosure pushes more families into the increasingly unaffordable rental market.

Along with evicted homeowners, millennials are finally moving out of their parent’s homes, competing for rental units with the standard influx of new renters. As rental demand increased, rent prices rose while wages remained stagnant in almost every U.S. market, leading Americans into serious rental affordability crises. The median rent cost in Los Angeles metro is $2,195 while rent in the city is even steeper at $2,330. Nationally, rent costs far less ($1,499) than in Los Angeles but is rising at a slower rate (3.4 percent year-over-year). Rents in Los Angeles increased by 4.9 percent in the last year.

If you are shopping for an apartment in Los Angeles, expect to pay 48.2 percent of your monthly income on rent. Builders cannot keep up with the number of new renters, causing fierce competition, enabling landlords to raise prices. Alternatively, a recent survey showed that current Los Angeles renters have more confidence in the housing market than last year and anticipate buying a home in 2015 – freeing up more rental units. Across the country, 5.2 million renters plan to buy this year which is up from 4.2 million last year.

However, if you can afford to invest in a major metro like Los Angeles you can expect continued appreciation due to the draw of jobs, attractions and city lifestyle.