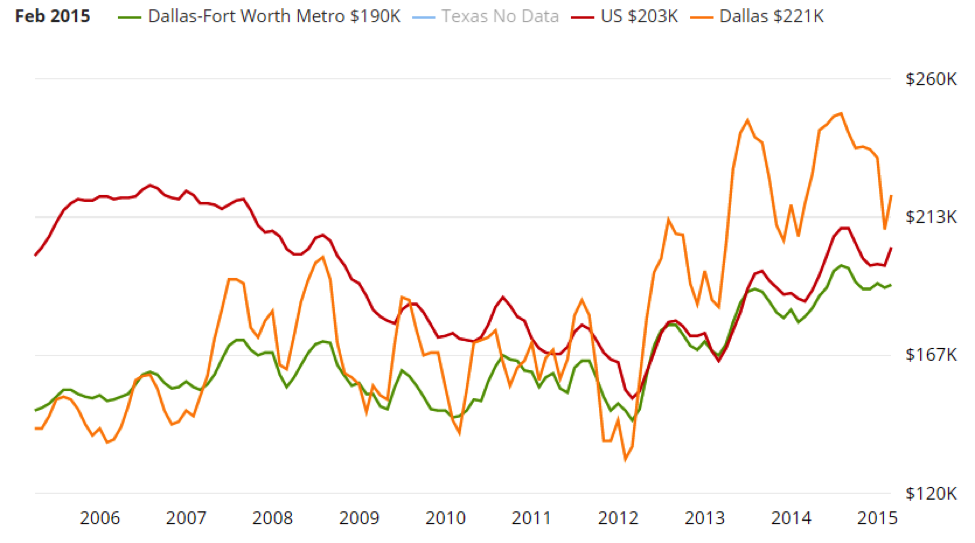 The Power Is Now Research Team 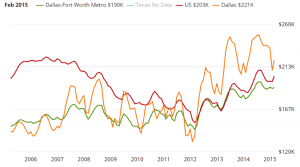 The Dallas-Fort Worth metro area is a hot sellers’ market with low inventory and rapidly rising home values. According to Zillow, the median sale price of homes in the metro area is $190,789 while homes in the city of Dallas sell at a steeper price of $221,532. These prices are right in line with the national median sale price of $203,678, indicating the area is keeping up with housing trends.

However, one of the most notable aspects of the Dallas market that separates it from the country is its rapid appreciation rate. From February 2014 to February 2015, home values increased by a dramatic 9.4 percent while the U.S. rose just 4.9 percent. Homeowners in Dallas considering selling should yield significant returns. Fortunately, owners who to wait another year to sell may even reap greater resale values.

Many homeowners facing negative equity are stuck in their homes because they cannot afford to sell them. If they were to sell, they would need to bring cash to closing because the price the buyers would pay would not cover the amount they owe on the loan. Many homeowners stuck underwater opt to foreclose instead of continue paying money they won’t earn back at resale. In the city of Dallas, 4.5 homes are foreclosed (per 10,000 homes) while the metro’s rate is slightly lower at 4.3 homes. Compared to the country’s foreclosure rate of 3.9 homes per 10,000 homes, Dallas locals are facing foreclosure more frequently.

The first stage of foreclosure is mortgage delinquency. Across the Dallas metro, 5 percent of homeowners are late on their mortgage payments. In the city, the percentage jumps to 5.4 percent and the national rate is 6.3 percent. Therefore, homeowners in Dallas are faring better than the county’s average, but are still falling into foreclosure.

After foreclosure, residents are evicted with damages to their credit scores that prevent them from borrowing in the next several years. These Dallasites often join the rental market. 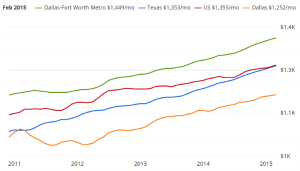 Rents cost Americans an average of 30.1 percent of their monthly income. In Dallas, renters pay 28.5 percent – not much better. Unfortunately, rents increased in the last year by 4.9 percent in Dallas, and 3.3 percent across the country.

These rent prices are not expected to decrease soon because demand is so high. As population growth adds pressure to the rental market, new units are not built at the same rate. Between 2012 and 2013, Dallas only permitted 312 new units for every 1,000 new arrivals. Lack of availability leads to great competition and price hikes. Plus, as property values increase, builders who purchase land to build new units must charge higher rents to cover their costs. Rising rents is the next housing crisis.

Across the country, home value appreciation should settle to a healthier rate of 2.6 percent. Dallas homeowners on the other hand, are in an ideal position with home values predicted to continue rising by 6 percent throughout the year. Owners considering selling are safe waiting another year for higher returns. Buyers who purchase now while interest rates are still low are can expect appreciation on their investments within the year.

Due to the steep rents and fairly average home prices, Zillow calculates the Dallas breakeven horizon at 1.3 years. The breakeven horizon is the length of time it takes for the upfront costs of buying to even out with the costs of renting. Therefore, Dallas residents who plan to live in the same location for more than 1.3 years are financially better off buying than renting. 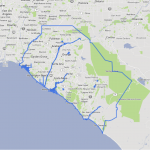 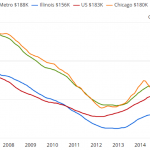