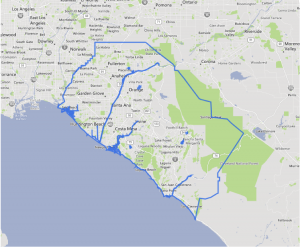 In the past year, home values in Orange County declined -0.8 percent on average. Although that’s almost no change for the year, it’s a significant deviation from the nationwide trend of 4.9 percent. The greater Los Angeles metro home values also appreciated by 4.5 percent throughout the past year. Even though the median appreciation rate in Orange County was negative, some areas such as Stanton (10.2 percent) and Lake Elsinore (9.5 percent) experienced exceptional home value growth. The communities with the most significant depreciation were Coto de Caza (-13.5 percent) and Laguna Beach (-9.6 percent). 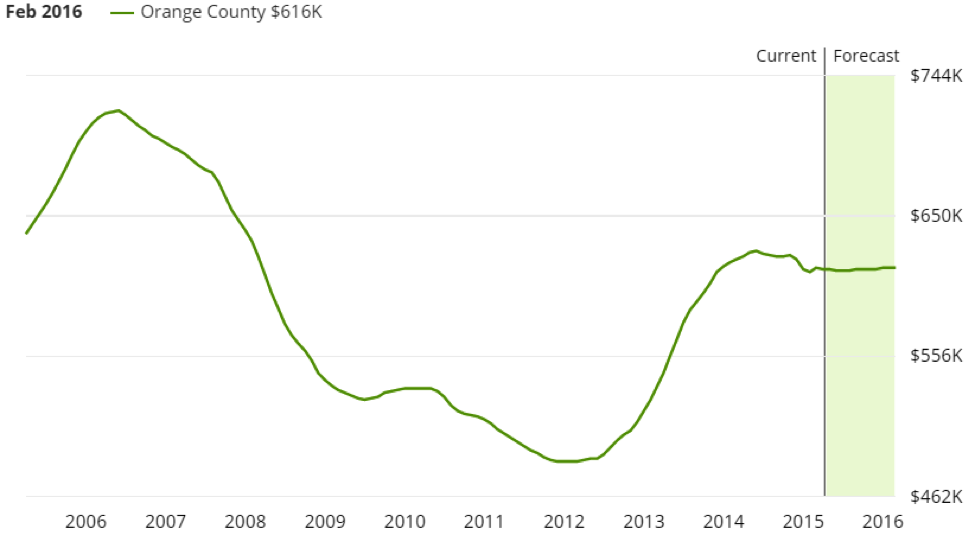 On a national scale, the Great Recession caused home values to drop from their 2007 peak prices to their lowest prices in late 2011 to early 2012. Home values dropped by 20 percent from those pre-recession highs and have since recovered to just 9.3 percent below their peaks. In Orange County, home values followed the same trend but recently fell again, just slightly (as shown in Figure 1). In May 2006, Orange County home values had a median price of $721,000 and fell to a trough of $486,000. Recovery led to values steadily climbing back up to original housing bubble figures. But in May of last year, values capped at $627,000 and have since dropped to $614,000. Zillow economists predict home values will remain flat at this price point throughout the year.

Many homeowners who purchased at the top of the market fell underwater on their mortgages when the housing market crashed – meaning they owned more on their properties than they were worth. The only options to escape negative equity are to accept market value from a buyer and bring cash to closing to cover the remaining loan amount, work with the lender to agree to a short sale or stop paying and go into foreclosure. The alternative is to continue paying toward a property that isn’t worth the investment – at least in the short term.

Steep home values make Orange County a more challenging location for first-time buyers – even for affording starter homes. Renting often becomes the better option. However, rents in Orange County aren’t particularly affordable either, and they’ve increased by 3.5 percent through the past year. The median rent price in Orange County is $2,200 per month, well above the U.S. average of $1,499. Even Lake Elsinore, the Orange County region with the lowest median rent price ($1,613/mo.), is still above the national price; and high-end Newport Beach ($4,019/mo.) more than doubles the national rate.

As mentioned, home values are not predicted to rise within the year and will remain flat instead. There is a significant distance that home values will have to rebound before reaching their pre-recession peaks, especially since settling at a slightly lower but still steep price point. National appreciation is predicted to slow to a more sustainable rate throughout the year, 2.6 percent. Rents across the country are anticipated to continue rising for at least another year.